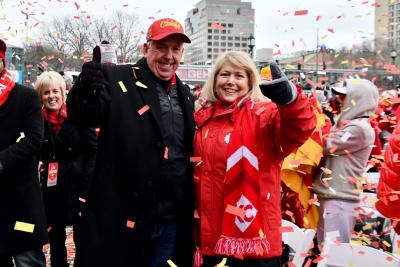 “It was truly an incredible experience to attend the Super Bowl and watch our Kansas City Chiefs bring the title back home to Missouri. The Chiefs Kingdom has waited for this day for 50 years, and Teresa and I were honored to be part of it – not just as Governor and First Lady of Missouri, but as longtime fans and season ticket holders,” Governor Parson said. “Throughout this season and three hard-fought playoff games, the Chiefs never gave up. They battled through adversity in true Show-Me spirit, and they have made us all proud. Congratulations to Super Bowl LIV Champions – our Kansas City Chiefs!”

In honor of the team's victory, Governor Parson signed a proclamation commending the Chiefs on a successful season and their status as Super Bowl LIV Champions.