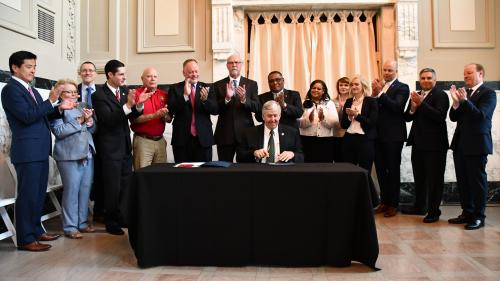 Jefferson City  Today, Governor Parson signed SB 182, which would restrict the award of economic development incentives to companies moving from Kansas to certain counties in Missouri.

“We want to work together with our peers in Kansas to support the growth of the entire Kansas City region,” Governor Parson said. “Incentivizing companies to move a few miles doesn’t result in new jobs for the citizens of Kansas or Missouri, and it takes state resources away from other priorities that would result in true growth for the state.”

The legislation, which only takes effect if Kansas executes a reciprocal agreement, would impact companies moving between Johnson, Miami, and Wyandotte counties in Kansas and Cass, Clay, Jackson, and Platte counties in Missouri.

Research done by the Hall Family Foundation which looked at moves between Johnson and Wyandotte Counties in Kansas and Jackson County in Missouri estimated that more than 10,000 jobs moved between the two states in the last decade, for an incentive cost of some $330 million.

Now that Governor Parson has signed the legislation into law, Kansas Governor Laura Kelly will need to complete a similar agreement for the truce to fully take effect.