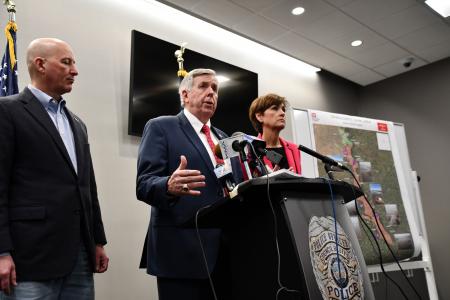 Council Bluffs, IA  Today, Governor Mike Parson,  Iowa Governor Kim Reynolds, and Nebraska Governor Pete Ricketts met with the U.S. Army Corps of Engineers (USACE) and the Federal Emergency Management Agency (FEMA) to hear an updated assessment of flood damage and look ahead on the Missouri River outflow. However, the primary purpose was to identify regional solutions for recovery and levee repairs.

“It’s long past time for change,” said Governor Parson. “We must begin a serious discussion about how we improve flood control on the Missouri River. One third of Missouri’s most productive farmlands’ fate rests in the hands of those who manage our rivers - the Corps. The Corps maintains one of the nation’s largest flood-control systems on the Missouri River mainstem, but the devastating flooding we are experiencing and the previous record 2011 flooding have demonstrated the current system is insufficient to protect us.”

After the 2011 flood, the Governors of Iowa, Kansas, Missouri, Nebraska, North Dakota, South Dakota, and Wyoming agreed that flood control was their number one priority. Today’s discussion marked the first step forward in Missouri River basin states reasserting their leadership in guiding the federal government’s management of the river.

“It’s time for a coordinated, consistent approach to Missouri River Management, levee reconstruction, and a long-term regional improvement plan,” said Governor Reynolds. “Today’s meeting was about each state presenting a united front to achieve a new level of effective response to severe flooding."

“Nebraska is just starting to recover and rebuild after the most widespread natural disaster in our state’s history,” said Governor Ricketts. “Today, we had a clear message for the Army Corps: We want to see people and communities put first.  As we rebuild, we are asking for the Corps and FEMA’s help in cutting red tape and rebuilding bigger and better than before to keep people safe. The three Governors committed to working together to change how the river is managed.”

All three Governors agreed their states are committed to taking a stronger and more active role in guiding the federal government’s management of the Missouri River. They also agreed that the number one priority is flood management and people.

“Our citizens cannot continue to risk their lives, homes, livestock, and futures on a flood-control system that is insufficient to protect them,” said Governor Parson.