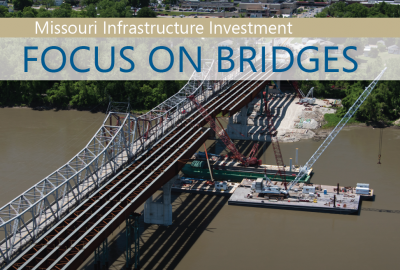 Jefferson City  Just six months after the program’s launch in May, the first project in Governor Mike Parson’s Focus on Bridges program is now partially open to traffic. A new Route 72 bridge over Stouts Creek in Iron County opened to one lane of traffic this morning.

The existing bridge was in such poor condition that the Missouri Department of Transportation (MoDOT) did not want it to carry traffic through the winter months. Consequently, the construction contract called for the new bridge, which is being built alongside the old structure, to be open to one lane of traffic with temporary signals at each end by mid-December.

Full completion of the bridge is expected this spring. The contractor for the project is Robertson Contractors of Poplar Bluff, Missouri.

The Focus on Bridges program was launched by a $50 million appropriation from general revenue by the Missouri General Assembly in May. In July, MoDOT then received an $81.2 million INFRA Grant from the U.S. Department of Transportation, triggering another $301 million in bonding revenue for the program that was also approved by the legislature during the 2019 legislative session.

In all, the program will repair or replace 250 of the state’s poorest bridges. The Route 72 bridge is one of six in the program currently under construction. The 43 others are under contract.