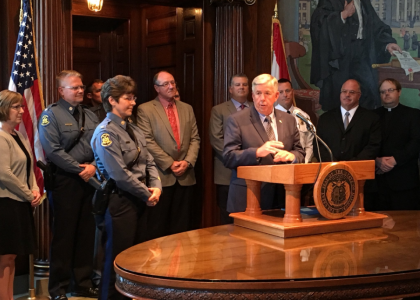 Jefferson City  Today, Governor Mike Parson announced Colonel Sandra Karsten as Director of the Department of Public Safety. Prior to her appointment, Karsten served 33 years at the Missouri Highway Patrol.

“Colonel Karsten is an exemplary public servant, and throughout her 33-year law enforcement career, she’s demonstrated the professionalism and integrity for which the Missouri State Highway Patrol is known. She’s a strong, focused leader who has never shied away from tough decisions, and understands the importance of teamwork. The Missouri State Highway Patrol is better, thanks to her service," said Governor Parson. “We are excited and have great confidence in her to lead the Department of Public Safety.”

Karsten was appointed the twenty-third Superintendent of the Missouri State Highway Patrol on February 1, 2017. The Missouri Senate confirmed her appointment Thursday, March 9, 2017. As a result of her confirmation, she was elevated to the rank of Colonel and sworn in on March 14, 2017.

She earned a Bachelor of Science in Criminal Justice from Truman State University and a Master’s Degree in Public Administration from the University of Missouri. Karsten is also a graduate of the Northwestern University Traffic Institute's School of Police Staff and Command. Colonel Karsten and her husband, Tim have two sons, John and Paul.

The Department of Public Safety (DPS) includes eight different agencies (including two commissions) and six separate programs, all dedicated to ensuring the safety of the citizens of Missouri. Additionally, the Office of the Director administers the Homeland Security Program and state and federal funds in grants for juvenile justice, victims’ assistance, law enforcement, and narcotics control.

Other programs in the Director’s Office provide support services and resources to assist local law enforcement agencies, as well as training criteria and licensing for law enforcement officers.