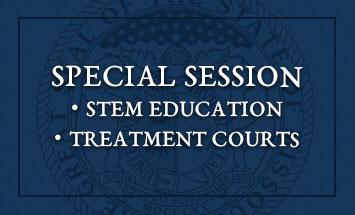 Session will Focus on STEM Education and Expansion of Treatment Courts

Jefferson City  Governor Mike Parson announced today that the Missouri General Assembly will be called back in for a Special Session concurrent with Veto Session.  The Special Session will take place the week of September 10-14 and will focus on the passage of computer science course access and awareness of career opportunities through STEM education as well as expanding treatment courts in the State of Missouri.

“When I addressed the General Assembly nearly three months ago, I pledged that I would change the tone and work with the legislature,” said Gov. Parson. “This call is a step in delivering that promise.  These two issues were a part of the General Assembly’s historic session as they passed a number of their priorities.  By working together to come up with a more narrowly defined focus, we will have better served the people of Missouri.”

The new STEM education requires Missouri Department of Elementary and Secondary Education (DESE) to establish an online program to educate students about STEM careers and allows for multiple companies to apply to provide the program.  By passing this during a special session, it will allow for DESE to start the process of implementing it for the 2019-2020 school year.  Senator Doug Libla sponsored one version of the original bill.

“Computer science being offered in our K-12 schools is so important to the future of our Missouri students and to the many companies that desire and depend on these skills. Thousands of high-paying jobs are available right now all across Missouri,” said Sen. Libla, R-Poplar Bluff.  “I would like to thank Gov. Parson and the Missouri Legislature for their past support of this life-changing legislation.”

“I applaud the Governor's action and comments.  I appreciate his recognition that Missouri treatment courts have been a great success at changing lives for the better, lowering criminal recidivism rates, saving tax-payer dollars by reducing incarceration, all the while making our communities safer and aiding our citizens in their quest to be more productive and improve their quality of life. I am excited to work with my colleagues and the governor to pass this crucial expansion of our treatment courts into law,” said Rep. Austin, R-Springfield.

Both leadership from the House and Senate have endorsed the Governor’s decision for a special session.  The timeliness of the call to have a special session concurrent with veto session will ensure that this special session is run efficiently, cutting down on any additional costs and saving taxpayer dollars.

“Since taking office in June, the governor has asked us for a fresh start and for us to begin working together for a better Missouri. We believe in his vision of moving Missouri forward by finding new solutions for workforce development and exploring innovation,” said President Pro Tem Ron Richard, R-Joplin. “We understand there are priorities the governor would like to accomplish before the end of the year. We respect those priorities, and as the Senate Leader, I will do what I can to push his agenda forward.”

“I appreciate the governor’s willingness to work closely with us to resolve these pressing issues that will have a positive impact on thousands of Missourians all across our state,” said House Speaker Todd Richardson, R-Poplar Bluff. “My colleagues and I are ready to have an efficient session that will improve our system of education to better prepare our young people for the jobs of the future, and give Missourians battling substance abuse access to treatment that will allow them to become healthy, productive citizens.”

In addition to legislators, Missouri leaders have spoken up in favor of the upcoming special session.

“Businesses across the state are struggling right now to find workers who have the skills they need. This problem severely impacts companies that are hiring for jobs that require computer science skills. I applaud Gov. Mike Parson and the Missouri General Assembly for focusing on STEM workforce readiness during the upcoming special session,” said Daniel P. Mehan, President and CEO, Missouri Chamber of Commerce and Industry. “Passing this legislation is an important first step toward improving computer science education in our state and giving students essential skills needed in today’s economy. This effort aligns with our Missouri 2030 plan and the business community anticipates important progress being made when lawmakers return to Jefferson City.”

"With tens of thousands of unfilled tech jobs in Missouri, it is more important than ever to make STEM career pathways visible to young people. As an organization that provides free, accessible tech training to Missourians, LaunchCode is proud to support legislation that will open doors to new generations of learners and better prepare them for accelerated, job-focused training programs like ours," said Jeff Mazur, Executive Director, LaunchCode. "We are grateful to Gov. Parson and legislative leaders for making STEM career awareness an urgent policy priority."

“Preparing tomorrow’s workforce for careers in STEM is an important priority for Cerner and we work to provide students with learning programs that offer the professional skills and technical knowledge to set them up for future success,” said Julie Wilson, Chief People Officer, Cerner. “We appreciate the continued focus by Gov. Parson on growing STEM education, which will further make Missouri a place to attract and recruit top talent for the jobs of today and the future.”

“Treatment courts are the most successful intervention in our nation’s history for holding accountable people living with substance use and mental health disorders, and leading them out of the justice system into lives of recovery and stability,” said Judge Alan Blankenship, 39th Circuit Court and President of Missouri Association of Treatment Court Professionals.

Though vetoed during the regular session due to problematic language that had been added, both received strong bipartisan support, and Gov. Parson reiterated that this special session is about agreement not division.