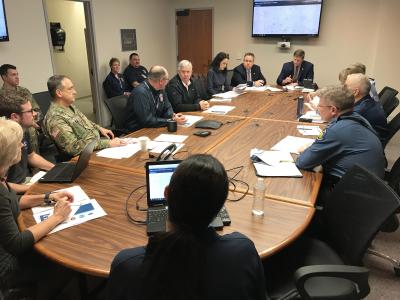 Jefferson City  – This morning, as Missouri River levels continued to rise, Governor Mike Parson met with his emergency management team to review and update flood response plans. The team met at the State Emergency Operations Center, which is activated in response to expected historic flooding along some areas of the Missouri River.

Missouri River levels are expected to rise dramatically this weekend, with a 1.5-foot rise expected by Saturday in some areas. The Gavins Point Dam in South Dakota is currently releasing 100,000 cubic feet of water per second due to rapid plains snow melt and heavy rainfall.

“Northwest Missouri is already experiencing significant flooding that’s closing roads and impacting homeowners and farmers, and the situation will affect many more Missourians in the coming days,” Governor Parson said. “I urge Missourians to use care when traveling in flood areas and to never attempt to drive on flooded roads. People who live near rivers should be paying close attention to flooding updates and be ready to move valuable property, if necessary.”

The Governor shared these safety tips:

Governor Parson is expected to travel to St. Joseph this afternoon, to meet with local officials and view response efforts. SEMA has assisted the City of St. Joseph inquiring 365,000 sandbags from the U.S. Army Corps of Engineers. SEMA also supplied St. Joseph with a sandbagging machine. The city is currently working to bolster levees.