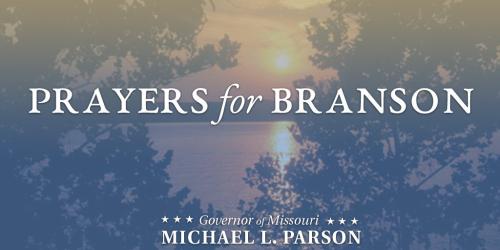 Governor travels to Branson area to meet with survivors, victims’ relatives, rescuers, and responders after boat capsizes killing 17 in severe storm on Thursday

Branson  Governor Mike Parson spent Friday in the Branson area meeting with survivors, victims’ relatives, rescuers, and emergency responders following the tragic sinking of a “duck” boat that killed 17 people in a severe storm on Thursday.

“What happened here last night was a heart-breaking tragedy, and we must all work together to support the victims and their families,” Gov. Parson said. “The courageous efforts of emergency responders and civilian rescuers helped avert an even worse tragedy, as people rushed to help in extremely dangerous conditions. I was inspired by the stories I heard from some of those who were part of the rescue effort and tremendously encouraged by the strength of the family members of victims I met with today. We pray for all those who were affected by this terrible tragedy.”

After meeting with Stone County Sheriff Doug Rader and others leading the recovery operation early Friday morning, Gov. Parson traveled to Cox Medical Center Branson to meet with survivors and some of the medical personnel who helped treat some of those injured Thursday night.  The Governor also met with some of the civilians and emergency responders who helped with rescues Thursday and with the loved ones of some of the victims.

Thirty-one people were onboard the Ride the Ducks amphibious vehicle when it sunk in strong winds and large waves Thursday evening. After working throughout the night and into today, nine Missouri State Highway Patrol divers have recovered the remaining four bodies from the water totaling 17 fatalities. The Patrol divers were among several dive teams that all worked expeditiously to recover the victims. Many of the victims were out of state visitors to the Branson area. Of the 14 survivors, seven were injured, one seriously.

The investigation into the boat sinking is being led by the National Transportation Safety Board and the U.S. Coast Guard. The Governor pledged the support of all state resources necessary to assist with the investigation.

On Friday, the Missouri Department of Natural Resources’ Critical Incident Stress Management team deployed to Branson to assist State Parks concessionaire staff and visitors who helped in search and rescue efforts Thursday. The concessionaire staff and visitors helped rescue two of the survivors and recovered the bodies of three victims immediately after the boat sank.

Other state resources that have responded to assist include the Department of Conservation and DNR State Parks rangers, the Missouri Department of Transportation, the Department of Mental Health, and the State Emergency Management Agency’s Disaster Mortuary Assistance Team.

Gov. Parson reminded the public that severe storms are again in the forecast, for southeast Missouri, this afternoon and evening and cautioned the public to follow their local forecast and to always take protective action when severe weather strikes.