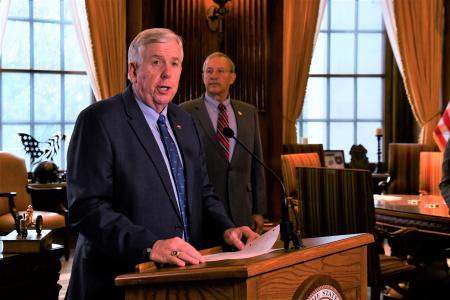 Jefferson City  Today, Governor Mike Parson signed Executive Order 19-18 regarding the use of vaping devices among youth in Missouri.

“As Governor, our future generation is very important to me. Despite the laws currently in place, there has been a rapid increase in vaping among our youth,” Governor Parson said. “People across the country are being hospitalized, some even losing their lives, with links to vaping. This is truly an epidemic, and it is critical that actions be taken to protect the health and well-being of Missouri’s youth.”

Governor Parson's Executive Order directs the Departments of Health and Senior Services (DHSS), Elementary and Secondary Education (DESE), and Public Safety (DPS) to use existing resources to develop a statewide campaign to educate, warn, and deter the use of vaping devices among Missouri’s youth.

The Executive Order further directs DHSS, DESE, and DPS to review evidence regarding the cases and effects of vaping-related injuries, specifically among youth, and tailor their prevention and educational messaging to counter vaping industry marketing practices that target youth.

Flavored nicotine products and targeted marketing have contributed to a significant rise in youth vaping. Recent data released by the U.S. Centers for Disease Control (CDC) and the U.S. Food and Drug Administration (FDA) show a rapid increase in the use of vaping products among youth, labeling such use as an epidemic.

As of October 1, 2019, the CDC has reported 1,080 lung injury cases and 18 deaths across the country this year associated with vaping products. In Missouri, 22 cases of vaping-related illnesses, including one death, have been reported as of October 4, 2019, with the majority of these reports involving individuals age 15 - 24.

Despite laws prohibiting the use of vaping devices among individuals under the age of 18, the Missouri Student Survey has reported increased use of such devices by middle school and high school students every year since 2014. The percentage of those reporting the use of a vaping device at some point in their lives increased from 19.1 percent in 2014 to 26.9 percent in 2018.

Nationally, the use of vaping devices among high school students increased by 78 percent from 2017 to 2018 according to the 2018 National Youth Tobacco Survey.

“We are facing an epidemic of youth vaping partly driven by the fact that many young people do not believe there are immediate or long-term risks associated with vaping,” said Dr. Randall Williams, Missouri Department of Health and Senior Services Director. “The ‘Clear the Air’ campaign is intended to ensure all youth and those who supply them with these products understand the real risks identified with youth vaping. Using e-cigarettes has become a gateway to traditional cigarette smoking for adolescents, and it’s led to dangerous addictions.”

“It’s important that parents and educators are aware of the dangers of vaping,” Commissioner of Education Margie Vandeven said. “We look forward to working with them and other state agencies in this effort to protect the health of our students.”

“These products aren’t just dangerous. Under state law, it’s illegal for minors to be vaping and for retailers to sell these products to anyone under age 18,” Department of Public Safety Director Sandy Karsten said. “The Division of Alcohol and Tobacco Control already conducts inspections of retailers and special enforcement operations to help ensure stores are not selling vaping products to minors. Because of the threat to public health, ATC agents will increase efforts aimed at vaping sales and in-store merchant education.”