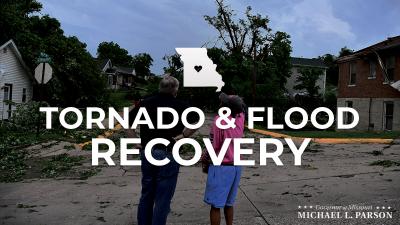 Jefferson City  Governor Mike Parson today announced Missouri has requested the Federal Emergency Management Agency (FEMA) participate in joint Preliminary Damage Assessments across a total of 58 counties – more than half the 114 counties in the state – in response to tornadoes, severe storms, and worsening flooding. The joint teams will survey damage that began with severe storms on April 29 and continuing since then in preparation for a request from the Governor for federal disaster assistance.

“Since March, nearly every corner of the state has been impacted by historic flooding, destructive tornadoes, and severe storms,” Governor Parson said. “We’ve closed more than 380 roads, halted barge loading on the Mississippi and Missouri rivers, shut down several railroad lines, and hundreds of families have been displaced from their homes – all because Mother Nature has refused to let up this spring. These critical issues place significant strain on our communities, farms, and businesses. We must take quick action to coordinate local, state, and federal resources to ensure Missourians have the tools to recover and rebuild as quickly as possible.”

Assessments are expected to begin on June 12 and will be conducted jointly by FEMA, the U.S. Small Business Administration, State Emergency Management Agency, and local emergency management officials. SEMA will coordinate an expedited assessment process by utilizing a helicopter to survey damage to homes that are the most inaccessible and cannot be assessed on the ground. The Governor said assessments for Individual Assistance, which provides assistance to homeowners and renters who’ve experienced qualifying losses, will be prioritized over Public Assistance, which assists governments and eligible nonprofit organizations.

The teams jointly document damage to determine the resources needed to help recover from a disaster. The assessments do not include every affected home or business, but those who have experienced flood- and storm-related damage should report it to their local emergency manager. Additional counties are expected to be added to the request for joint assessments as they collect more information about damage locally.

National Flood Insurance Program figures show that from March 1, 2019, through Monday, more than 600 claims have been filed in Missouri for flooding losses. More than $9 million has been paid to 213 property owners. The figure is expected to rise significantly as additional claims are resolved and additional claims are filed.

The declaration made federal assistance available for the repair of damaged roads, bridges, and other public infrastructure, along with emergency response costs associated with the storms and flooding. The Governor’s April 24 request stated $25 million in qualifying expenses had already been identified.